AI and the Rise of the Bots

It’s still a little hard to get used to. For a number of years this would be the week I would make my way to the Big Apple, the financial services mecca of North America, to attend #CRMEvolution. The event used to take place in a hotel right in Times Square. There was always a flurry of activity all around.

For the second consecutive year though, the event is in Washington. The venue is better suited for the event. The people seem a little more relaxed and engaged. Rather than the focus NY has on finance, Washington is a place of politics. Suffice to say, the vibe is different, not better, not worse, but different.

It’s Sunday afternoon, April 25, a gorgeous day in Toronto. I mean, not a cloud in the sky, hardly a breeze in the air to make the 18 degrees Celsius feel anything but perfect. It’s coincidental that I’m leaving Toronto for Washington on a day that my hometown heroes, the Toronto Maple Leafs, are playing the Washington Capitals in Toronto in game 6 of a best of 7 playoff series. The puck will drop to start the game around the same time as I land (unfortunately Toronto lost that game and were eliminated from the playoffs. I escaped the establishment where I watched unscathed.)

The highlight from the first day was a presentation from Rebecca Wettemann of Nucleus Research on the evolution of the sales funnel. Much was covered including the concept of leads. Because customers do most of the product research and selection process themselves, firms should not be paying for leads any more. Given that the sales funnel now looks more like a cylinder, where a customer can enter at varying points in the buying cycle, marketing is really looking for qualified prospects. 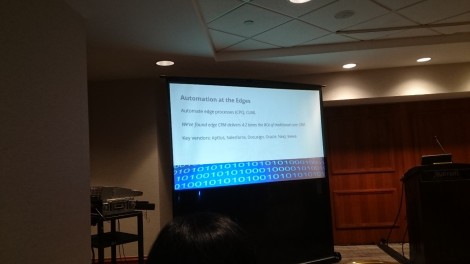 Also discussed was the concept of micromarketing where sales is responsible for mini-campaigns against their own pipeline while marketing focuses on more strategic initiatives.

Rebecca was also kind enough to mention NexJ as a vendor that delivers “automation at the edges,” which speaks to CRM functionality that delivers 4.2X more value than traditional CRM. Nucleus has recognized NexJ as expert in their CRM Value Matrix.

Breakfast with the influencers got us started at 8am on Tuesday. This session is a very free-flowing discussion among industry analysts including Ian Jacobs from Forrester, Esteban Kolsky, Brent Leary, and Paul Greenberg, among others, about currents trends. The dialogue is similar to what I imagine might take place if the group got together at the local watering hole. The initial topic was chatbots, which I have spoken about in the past, which led directly to artificial intelligence. The entire remainder of the conversation held on that one topic. The consensus was that AI has come a long way over the years but is still just scratching the surface of its potential.  The big question asked was “what are we afraid of” with respect to the advancement of AI?

The topic of AI extended further in a panel session led by Brent Leary. I found the distinction made between machine learning and deep learning to be interesting. They resolved that machine learning is using data to come up with a model. These models are created on our knowledge and expertise. It’s an inductive approach. Better when using structured data.

Deep learning revolves around neural networks trying to mimic the brain. There are neurons that layer on top of each other. Neural nets don’t tell you why it got at the answer. It is better at unstructured data.

As a foundational statement the panel wanted to ensure everyone shared the opinion that the end goal of AI is to drive a better customer experience – not drive down costs or replace labour.

With that understanding the discussion evolved to how this will impact CRM technology. Simply stated, the subtle and quick impact will be the automatic fill of many of the input boxes in CRM. And there will be more auto creation of contacts. So the traditional complaint from users that they get very little out of CRM relative to the amount of effort of adding information is going away. At NexJ we refer to this as making user net receivers of information. 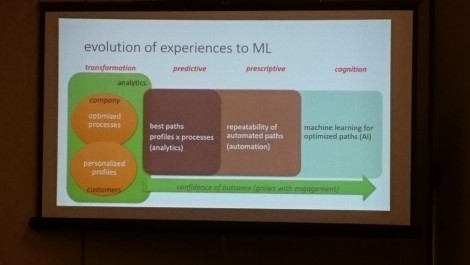 The final session of the day was presented by Estoban Kolsky. It was also about AI, which to him means teaching computers to think like humans so we can offload some of the things we don’t like to do. And the reason AI, which has been around for decades, is getting more attention now is because the computing power required is cheaper and we are amassing enough data to make it work.

I was particularly captivated by his 3 stage breakdown of how AI will affect the enterprise. First you optimize, then you personalize and lastly you automate.

As always, I came away from the show with a great deal of information and good experiences. Come next year I might even be more accustomed to the Washington location but it is hard to predict the future. Maybe there is some artificial intelligence that can come up with that answer for me.

Trying to tell corporate and investment bankers about the importance of understanding their customers is a lot like listing the benefits of butter to a pastry chef. They get it. They know it really, really well. And yet, considering we are in the business of Customer Relationship Management, I sometimes can’t help but question what this means.

END_OF_DOCUMENT_TOKEN_TO_BE_REPLACED

Innovation and a global approach

END_OF_DOCUMENT_TOKEN_TO_BE_REPLACED

When It Comes To CRM, User Adoption Is Always A Challenge. Here's How One Of Our Biggest Clients Pulled It Off

You may have the best possible CRM solution on the market, a deep vertical award-winning software geared to meet your every need. What you will always struggle with is poor user